Brynn is one of the main characters in the story. He's a cave dragon who enjoys expanding his riches and bargaining with smaller species.

ntain. As soon as he learned how to fly at the age of 15 he left his family like all young dragons do to discover and learn about the world.

He chose his home cave in a mountain surrounded by a lush yellow birch forest and finished his renovations a few years later around the age of 80.

Brynn has deep purple scales covering his body with turquoise wing membrane, belly, and details. His eyes are a glowing lime green with a slit pupil that dilates depending on external factors. He is slim for a cave dragon as he's still quite young.

His scales are larger near his underside for protection while the scales on his face are smaller to accommodate facial movement.

Brynn in his human disguise is overall quite grayish as he favors blending into crowds over attracting unwanted attention, which makes his skin color a bit inhuman. His dark grey hair is slicked back with some stylistically loose strands and his chin is covered with a goatee.

In his attempt to make his disguise seem more human Brynn also added dark bags under his eyes to show some human weakness as well as making his eyes heavy lidded, all to make himself more unassuming.

Solitary like most dragons, Brynn left his family behind at a young age and has with time forgotten all about them but their existence in his family tree.

He can fly cause he's a dragon, and he can breathe fire. And sometimes he appears as a human. 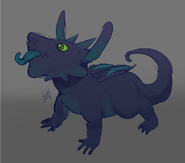 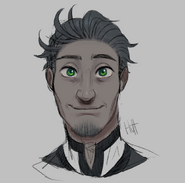 Add a photo to this gallery
Retrieved from "https://the-story-of-brynn-estelle.fandom.com/wiki/Brynn?oldid=274"
Community content is available under CC-BY-SA unless otherwise noted.